Be the first to review this product
$75.00
In stock
SKU
65273
Add to Wish List Add to Compare
Collectors Limited is proud to offer a large assortment of genuine sports cards. Get this Shaquille O'Neal 1992-93 Topps Stadium Club Members Choice #201 CSG 8.5 today.
Skip to the end of the images gallery 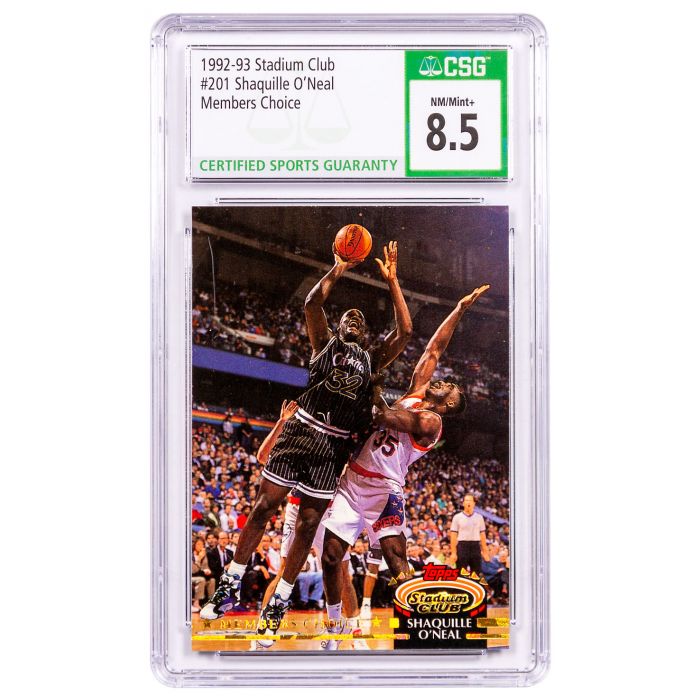 Shaquille O'Neal, affectionately known to fans simply as "Shaq," had a standout career at every level. In high school, he was a first-team Parade All-American and Texas Mr. Basketball. He was also a co-MVP of the McDonald's All-American Game. O'Neal played for LSU in college, leading the NCAA in rebounds in 1991 and blocks in 1992. In 1991, he also won the Adolph Rupp Trophy and was both the AP and UPI Player of the Year. He was SEC Player of the Year and a consensus first-team All-American in 1991 and 1992.

O'Neal was picked by the Orlando Magic with the first overall selection in the 1992 NBA Draft and earned Rookie of the Year honors in his first season. He went on to play for six NBA teams and won four NBA titles, three with the Los Angeles Lakers and one with the Miami Heat. He was the MVP of the Finals in the three that he won with the Lakers and the NBA MVP in 2000. He was a 15-time All-Star and was eight times All-NBA First-Team. O'Neal's success extended to the international level, as he won gold at the FIBA World Cup in 1994 and the Olympics in 1996. O'Neal has been inducted into the College Basketball Hall of Fame, the FIBA Hall of Fame, and the Naismith Memorial Basketball Hall of Fame.

This card's 8.5 NM/Mint+ grade indicates that the card has relatively smooth edges with just minor touches of wear. The card retains its original gloss and color borders. In this condition, it may have a very slight diamond cut and/or a very minor flaw, such as a few minor print spots or subtle focus imperfections on the image.