We use cookies to make your experience better. By continuing to browse our site, you agree that you have read and understand our Privacy Policy. Learn more.

Be the first to review this product
$100.00
In stock
SKU
65253
Add to Wish List Add to Compare
Collectors Limited is proud to offer a large assortment of genuine sports cards. Get this Michael Jordan 1993-94 Hoops All Star #257 CSG 9 today.
Skip to the end of the images gallery 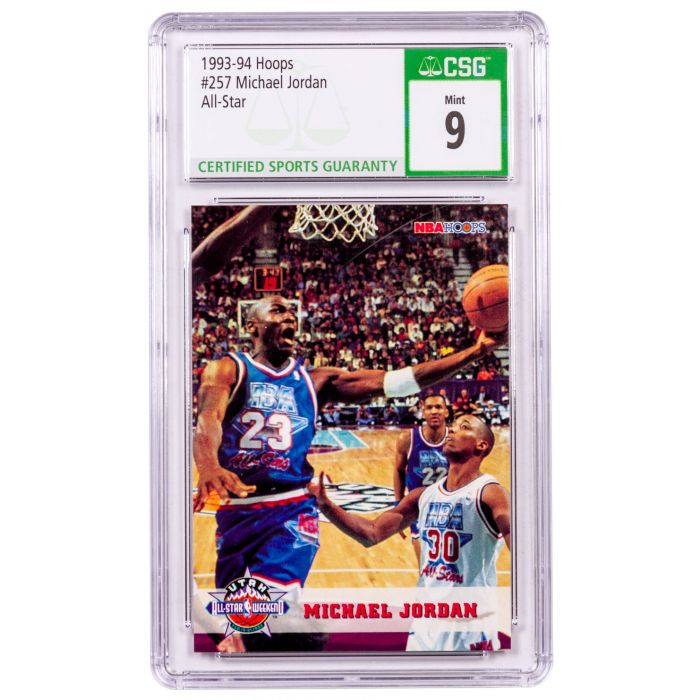 A Legend of the Game

Michael Jordan is considered by many to be the greatest basketball player in the history of the game. His name started to build in high school, as he was named both a Parade All-American and a McDonald's All-American in 1981. In his freshman year at the University of North Carolina, he was named ACC Rookie of the Year and won the National Championship. He went on to be a consensus first-team All-American in 1983 and 1984 and was the National College Player of the Year in 1984. He was also USA Basketball Male Athlete of the Year in both 1983 and 1984. In '84, he won his first of two Olympic gold medals. He won his second in 1992 as a member of the Dream Team. He was drafted by the Chicago Bulls in 1984 and was named Rookie of the Year in 1985. Jordon went on to win six NBA titles (1991-1993; 1996-1998) and was the Finals MVP on all six occasions. He was also NBA MVP five times and played in fourteen All-Star Games.

Jordan's success made him popular among companies seeking celebrity endorsements. He appeared in ads for such well known companies as Nike, McDonald's, Coca-Cola, Hanes, and Wheaties. Perhaps none is more famous, though, that Gatorade, a company that included the song "Be Like Mike" in his ads as a reference to the countless children who aspired to reach the same levels of success. He also starred in the movie Space Jam and appeared in Michael Jackson's music video "Jam."

This card was graded 9 Mint by CSG. That means that it has four sharp corners with no more than minor wear visible. Its centering is 55/45 or better, and it may have slight minor flaws on the edges. The surface still has its original gloss, but a few specs or one minor spot or surface defect may be present.