Be the first to review this product
$170.00
In stock
SKU
65970
Add to Wish List Add to Compare
Collectors Limited is proud to offer a large assortment of genuine sports cards. Get this 2020 Panini Mosaic Chase Young PSA 10 Reactive Blue (Rookie Card) today.
Skip to the end of the images gallery 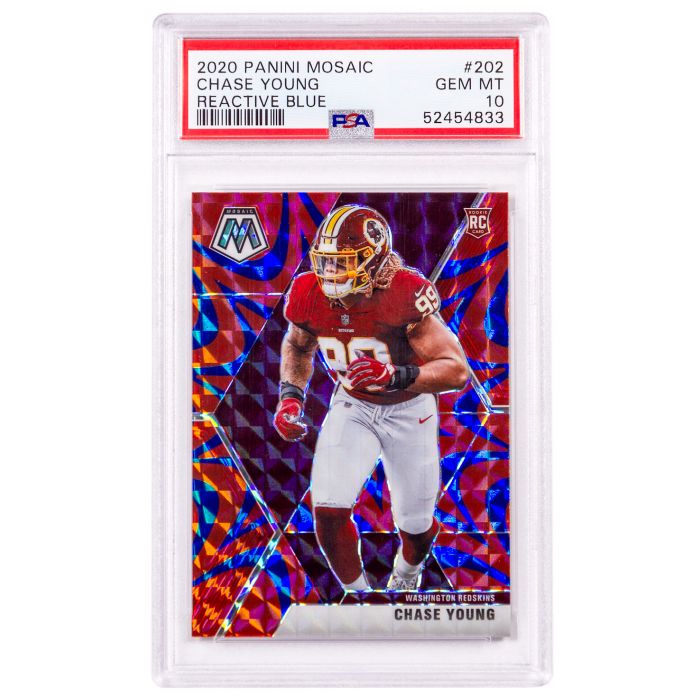 A Star in Columbus and Washington

Chase Young had a standout career with the Ohio State Buckeyes. Allen started his career in Columbus as a reserve player. In 2016, he recorded 3.5 sacks, 18 tackles, and a forced fumble. In his sophomore year, he sprained both ankles halfway through the season but still managed to record 10.5 sacks, including three in the Big Ten Championship Game. His season earned him second-team All-Big Ten honors. Young was selected as a team captain in his junior year, in which he set single game school records for sacks (4) and tackles for a loss (5) against Wisconsin. For the year, he recorded a school record 16.5 sacks, as well as 46 tackles including 21 for a loss, 7 forced fumbles, 3 pass deflections, and a blocked field goal. Among his awards for the season were All-American Team selection, the Bronko Nagurski Trophy, the Chuck Bednarik Award, Nagurski-Woodson Defensive Player of the Year, and Smith-Brown Defensive Lineman of the year.

Young decided to enter the NFL Draft after three seasons in college. Widely considered the best overall prospect, he was selected second overall by the Washington Football Team. In 2020, he earned a spots in the Pro Bowl and the PFWA All-Rookie Team, as well as NFL Defensive Rookie of the Year Honors. In his first year in the league, he recorded 42 tackles including 30 solo tackles, 7.5 sacks, 4 forced fumbles, and three recoveries, including one for a touchdown.