We use cookies to make your experience better. By continuing to browse our site, you agree that you have read and understand our Privacy Policy. Learn more.

Be the first to review this product
$50.00
In stock
SKU
66317
Add to Wish List Add to Compare
Collectors Limited is proud to offer a large assortment of genuine sports cards. Get this 2019 Panini Prizm Miles Sanders PSA 10 (Rookie Card) today.
Skip to the end of the images gallery 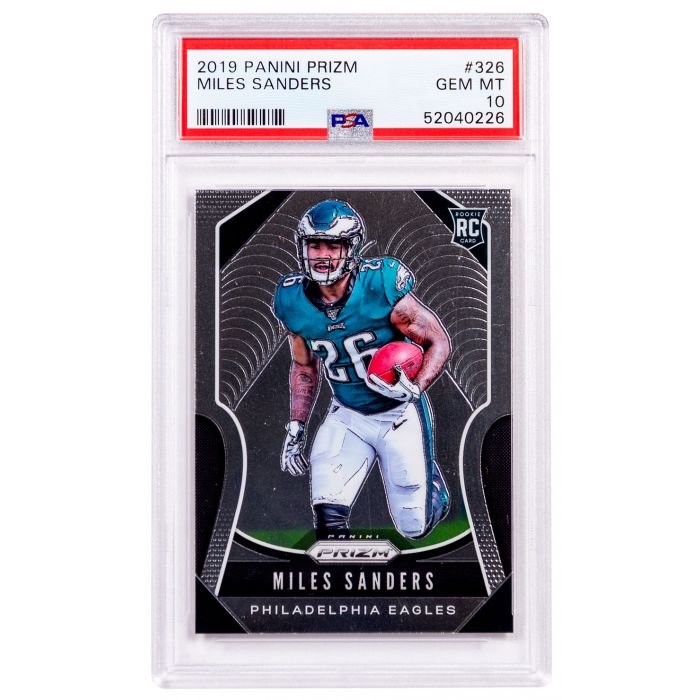 Miles Sanders announced himself on the national football scene in high school. A native of Pittsburgh, Pennsylvania, he played for Woodland Hills High School. There, he started as a running back for three years. in his senior year, he was named Pennsylvania's Mr. Football. He stayed in-state for college, attending Penn State. In his freshman year, Sanders backed up superstar Saquon Barkley at running back while setting the school record for kick returns in a season (33). He continued in the backup role as a sophomore, though he did get a start against Rutgers. Sanders became the first choice as a starting running back in his junior year, in which he started all 13 games. His best performance came against Illinois, against whom he rushed for 200 yards on 22 carries. Following the season, he announced his decision to forego his senior season and enter the NFL Draft.

The Philadelphia Eagles picked Sanders 53rd overall in the 2019 draft. In his rookie year, he started 11 games and played in all 16 during the regular season. He rushed for 818 yards on 179 attempts and scored 3 touchdowns while adding 50 receptions for 509 yards and 3 touchdowns receiving. That earned him a place on the PFWA All-Rookie Team. In his second year in the league, he played in 12 games, starting 11, and rand for 867 yards and 6 touchdowns while catching 28 passes for 197 yards. Those contributions earned Sanders a spot in the NFL Pro Bowl.

As evidenced by its Gem Mint 10 grade, this card is free from staining, though there may be a slight printing imperfection that does not detract from the card's appeal. The image is centered 55/45 - 60/40 or better on the front and 75/25 or better on the reverse. The card has its full original gloss, as well as four perfectly sharp corners and sharp focus.