Be the first to review this product
$75.00
In stock
SKU
66313
Add to Wish List Add to Compare
Collectors Limited is proud to offer a large assortment of genuine sports cards. Get this 2017 Panini Prizm Chris Godwin PSA 10 Silver (Rookie Card) today.
Skip to the end of the images gallery 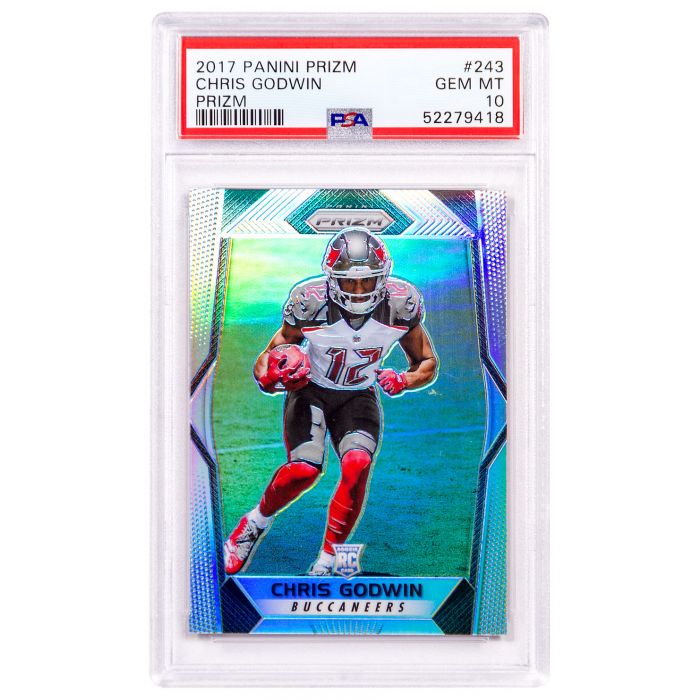 A College and Pro Standout

Born in Philadelphia, Pennsylvania, Chris Godwin went to Penn State, where he was a standout. He played in 13 games his freshman year, contributing 26 catches for 337 yards and 2 touchdowns. That earned him a spots on the BTN.com Big Ten All-Freshman Team. His contribution to the team's offense dramatically increased the following year, when he caught 69 passes for 1,101 yards and 5 touchdowns. He had 100+ yards in five games, including the TaxSlayer Bowl versus Georgia. Teams gave Godwin more attention in his junior year, and he struggled to adjust to the double coverage. He finished the season with 59 catches for 982 yards and 11 touchdowns including two against Southern California in the Rose Bowl. Rather than play in his final year of eligibility, he declared himself eligible for the 2017 NFL Draft.

The Tampa Bay Buccaneers took Godwin in the third round of the draft with the 84th overall pick. While he played in all of the team's games in his first two seasons, he started just two in his rookie year and five in his second season. In 2019, Godwin had a breakout year. He started 14 games and caught 86 passes for 1,333 yards and 9 touchdowns. Following that season, the Buccaneers picked up quarterback Tom Brady, who led his team to a Super Bowl victory. En route, Godwin played in 12 regular season and four post-season games. In the post-season, he caught 16 passes for 343 yards and a touchdown, important contributions to his team's championship.

This card's Gem Mint 10 grade means that it is free from staining and has four perfectly sharp corners. In this grade, the focus of a card is usually sharp and still features all of its original gloss. The card may have a slight printing imperfection so long as that imperfection does not impact the card's overall appeal. The card's centering is 55/45 - 60/40 or better on the from and 75/25 or better on the reverse.