Be the first to review this product
$60.00
In stock
SKU
65962
Add to Wish List Add to Compare
Collectors Limited is proud to offer a large assortment of genuine sports cards. Get this 2016 Panini Prizm Jordan Howard PSA 10 Light Blue Prizm /199 (Rookie Card) today.
Skip to the end of the images gallery 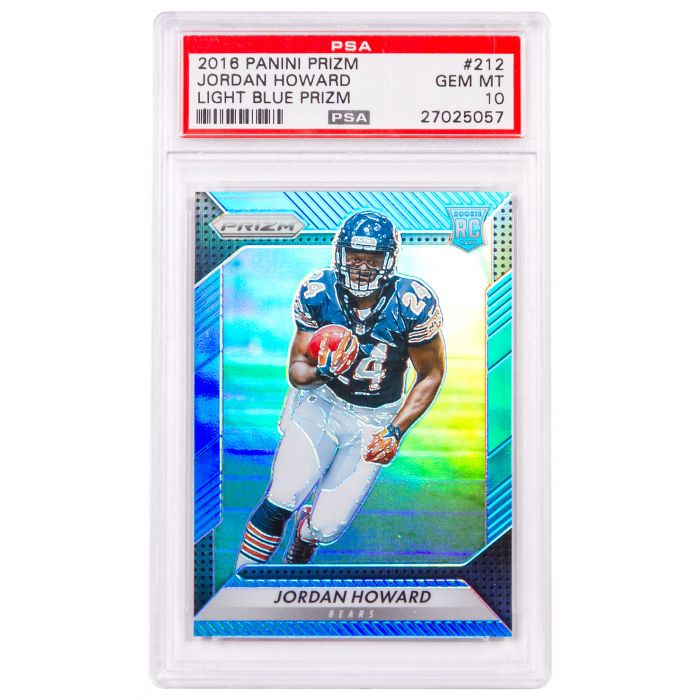 From Conference USA to the NFL

Jordan Howard played the first two seasons of his collegiate career at the University of Alabama at Birmingham. In his freshman year, he ran for 881 yards on 145 carries and scored two touchdowns while adding another 83 yards on four receptions and a receiving touchdown. In his sophomore year, his numbers improved to 1,587 yards and 13 touchdowns on 306 carries. He also caught 9 passes for 72 yards and a touchdown. UAB shut down its football program after his sophomore season, and Howard transferred to Indiana. In his only season in the Big Ten, he ran for 1,213 yards and 9 touchdowns on 196 carries, adding 106 yards and a touchdown receiving.

Howard decided to forego his senior season and declare himself eligible for the 2016 NFL Draft. He was the third highest rated running back heading into the NFL Scouting Combine, but following the NFL Combine and Indiana's pro day, he dropped to the fifth round. He was selected 150th overall by the Chicago Bears. Howard played three seasons for the Bears, gaining the most yards in his rookie season (1,313 rushing and 298 receiving). He scored seven total touchdowns that year and nine in each of the following two seasons, each of which saw his rushing yards and rushing average decline. Howard was then traded to the Philadelphia Eagles, where he played part of one season before suffering a shoulder injury that sidelined him for the season. In 2020, the Miami Dolphins signed him in the off-season, but waived him in November. He then returned to the Eagles as a member of their practice squad before being activated and playing in the final two games of the season.

Cards like this one that have been graded Gem Mint 10 have four perfectly sharp corners, retain full original gloss, and have sharp focus. The card does not have any staining but may have a slight printing imperfection so long as that imperfection does not impair the card's overall appeal. The card must be centered 60/40 or better on the front and 75/25 or better on the reverse.