Be the first to review this product
$125.00
In stock
SKU
68783
Add to Wish List Add to Compare
Collectors Limited is proud to offer a large assortment of genuine sports cards. Get this 2006 Topps Chrome Chris Paul PSA 9 Rookie Card today.
Skip to the end of the images gallery 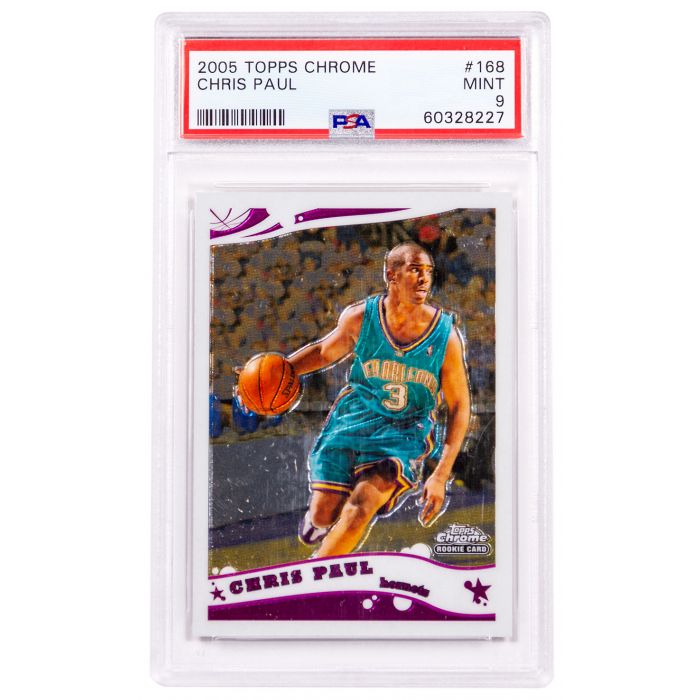 A Collegiate and NBA Star

Chris Paul played two years for the Wake Forest Demon Deacons. He set school freshman records for three-point percentage, free throw percentage, free throws, steals, and assists. He brought his team to the Sweet 16 and earned ACC Rookie of the Year and Third-team All-ACC honors in the process. During his sophomore year, Wake Forest briefly held the #1 ranking for the first time ever. He averaged 15.3 points, 4.5 rebounds, 6.6 assists, and 2.4 steals per game, for which he became a First Team Consensus All-American. He turned pro after his sophomore year.

The New Orleans Hornets picked Paul with the fourth pick of the 2005 NBA Draft. He went on to play for the Los Angeles Clippers, the Houston Rockets, the Oklahoma City Thunder, and the Phoenix Suns. Over the course of his career, he has been a 12x NBA All-Star, the MVP of the All-Star Game, four-time All-NBA First Team, five-time All-NBA Second Team, seven-time NBA All-Defensive First Team and two-time All-NBA Defensive Second Team. In addition to his outstanding domestic career, Paul was also part of Team USA's gold medal winning teams at the 2008 Beijing Olympics and the 2012 London Olympics.

This card's Mint 9 grade means that it has just one flaw among a minor printing imperfection, slightly off-white borders, and a very slight wax stain on the reverse. The centering of cards in this condition on the front is 60/40 to 65/35 or better, while the reverse centering is 90/10 or better.

More Information
Reviews
Write Your Own Review
Applied promo
Collectors Limited® is a brand of Asset Marketing Services, LLC (AMS). ALL PRODUCTS ARE SOLD “AS IS” AND WITHOUT WARRANTY, PROMISE OR REPRESENTATION. NO CANCELS, NO EXCHANGES, NO CREDITS, NO RETURNS. ALL SALES ARE FINAL, Prices, facts, figures and populations are deemed accurate as of the date of publication but may change significantly over time. © All rights reserved.